A myth at its core is a story to explain something complex. Over time, the story is broadly disseminated such that popular consciousness can, at times, accept it as true at face value. At Greenspring Associates, we believe that a pervasive myth exists in the venture capital Limited Partner ecosystem: the notion that venture capital is an “access class.” Said differently, if you polled institutions that allocate to venture capital and asked them to identify the single most important factor in determining strong performance, the vast majority would cite access to the “best brands.” The truth is that a profound change is underway in our industry. Over 600 micro-vc firms have been founded within the last five years, countless “branded” firms have experienced generational transitions and new geographies have emerged as viable complements to the US. In our opinion, the dynamic nature of the market necessitates an investment approach not tethered to traditional thinking. For us, a dynamic approach is encapsulated by four key themes: 1) a commitment to backing emerging managers; 2) a global orientation and an openness to allocating capital to managers outside of the US; 3) the belief that several stage orientations can generate outsized returns; and 4) a view that historical returns are a not an effective way to measure the potential value derived from a manager relationship. 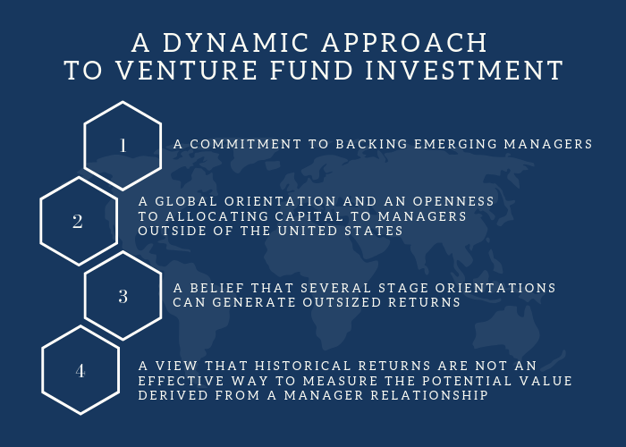 As one of the larger and more established venture fund investors, we spend considerable time and devote meaningful resources to understanding how we generate returns for our investors. In this vein, one logical question that we explore on an ongoing basis is: Which is more important, access or identification? In other words, have our commitments to established or “branded” managers outperformed relative to our commitments to emerging managers, or is the opposite true? In order to ground our analysis in objectivity, we define established firms as those that have raised three or more funds prior to our first commitment. For the purposes of the analysis, we only examined mature funds (2015 vintages or earlier) to ensure that current performance is at least somewhat indicative of end-of-life performance, and that the effects of the J-Curve did not materially influence the results. Given the confidential nature of our underlying funds’ performance, we can only compare the returns of the two categories to one another.

As the data above reveals, in our experience investing across approximately 180 partnerships, emerging managers have outperformed relative to their established counterparts. We attribute this to a number of factors. First, attractive emerging firms, especially “spin-outs,” are, in many cases, comprised of a small group of partners with strong track records. Rather than deploying a percentage of a larger fund, these partners are now deploying all of a smaller fund. From an investor’s perspective, this can mean more concentrated exposure to the outperforming partners. The second reason is a simple one. Most emerging firms raise smaller funds than their established counterparts. In venture capital, smaller funds generally outperform, as a single outlier has the potential to generate strong fund-level performance, even if the fund is only able to garner modest ownership. Finally, most emerging firms do not have to deal with generational planning in the near or medium term. Given the fact that these firms themselves are new ventures, most partners fully expect to invest for a long period of time.

While this data and these considerations form the foundation for our commitment to sourcing and building relationships with new managers, investing in this corner of the venture industry is not without its own unique set of risks. In this portion of the market, we believe certain aspects of due diligence that might be obvious when evaluating established managers must be consciously prioritized. Our due diligence centers on evaluating whether or not a manager’s model is highly differentiated, perhaps by stage, sector, location, network, structure or broad thesis. We also attempt to carefully reference the track records of each partner to understand his or her unique contributions to sourcing, evaluating and advising the companies in question. And, finally, we examine fund size and portfolio construction with a tremendous amount of scrutiny. We want to ensure that the manager’s model allows them to capture and double down on outperforming companies, so that the winners can propel outperformance.

A second key theme in helping to dispel the access myth is an openness to allocating capital outside of “traditional” venture capital geographies (for example, Silicon Valley, Boston, New York and the U.S., more broadly). While the U.S. and our well-known domestic hubs of innovation have certain innate characteristics that make them bastions for entrepreneurship, let’s face it: they don’t have a monopoly on innovation. The opportunity to finance high growth companies with breakout potential extends well beyond our two coasts.

Take China, for example. Its five largest venture-backed IPOs in the last five years were companies with an average market cap of $22.7 billion.[1] On average, it took these companies 4.5 years to reach this valuation.[2] In contrast, the average market capitalization of the top five venture-backed IPOs in the U.S. during the last five years was $8.0 billion (approximately 2.7x lower than the Chinese companies), and it took these companies 7.7 years (approximately 1.7x longer than the Chinese companies), on average, to garner this valuation.[3] Nine of the twenty largest Internet companies by valuation are now Chinese. Eight of these companies cracked the top twenty in the last five years. Beyond the staggering demographic trends, China now features a robust entrepreneurial community, a set of massive domestic technology companies looking to acquire innovative assets, an open IPO market and a subset of venture capital investors with meaningful experience. These factors have helped contribute to the outperformance of China-focused venture capital funds over recent vintage years. According to Cambridge Associates, upper quartile China-focused venture funds have outpaced their US counterparts by 0.64x, on average, based on net TVPI in 2012 to 2016 vintage funds.[4] The chart below provides additional details. 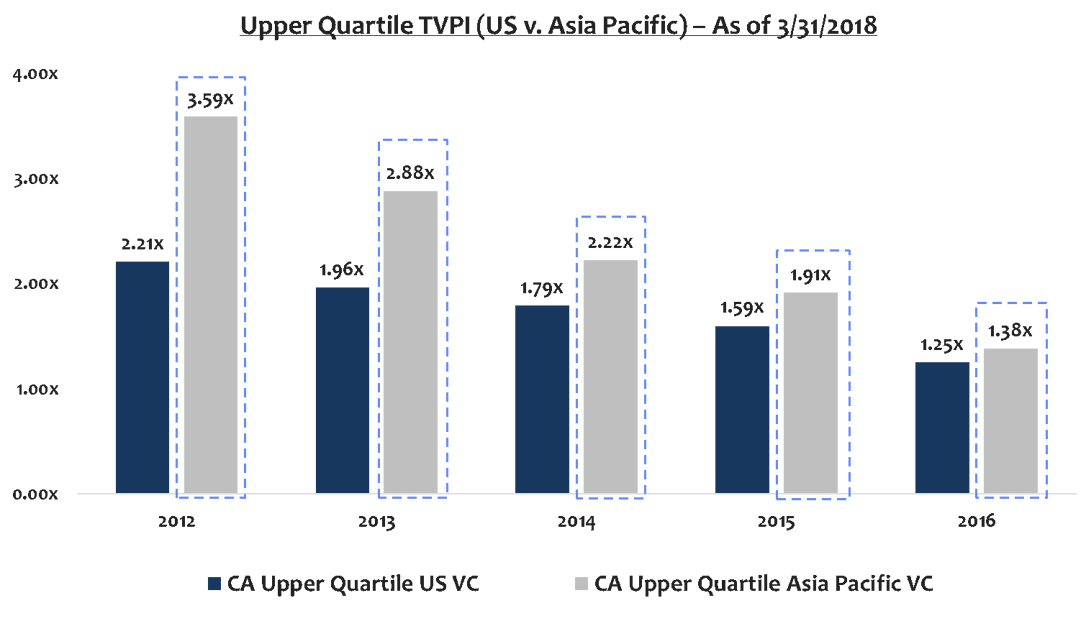 We feel strongly that, too often, investors take a myopic view towards allocating to venture capital. Why limit yourself to considering venture only if you can garner allocation to a small subset of Silicon Valley firms? The fact is the market is expansive and filled with opportunities, when approached with an open mind. This is the main reason why we, at Greenspring, have been active fund investors in China since 2005 and in less traditional geographies in the U.S. since our inception.

A corollary to the access myth is the unfounded bias that early stage managers are the only firms well equipped to generate outsized returns. Sure, early stage firms have certain advantages in maximizing the fund-level impact of outliers relative to their later stage peers. This includes lower valuation entry points and an ability to “layer” into winners in subsequent financing rounds. While exposure to outliers is certainly one approach to generating strong returns, it is important to keep in mind that the vast majority of venture capital exits are relatively modest. Despite all of the unicorn headlines, the $1 billion plus outcome is still exceedingly rare. In fact, in 2018, 90% of total venture capital exits came in the form of M&A transactions[5], and 83% of those with a disclosed value were transactions valued below $500 million.[6] In an environment where most exits are relatively modest, we believe small growth equity strategies less reliant on outliers can be highly successful. Take, for example, an existing Greenspring manager. In its first fund, this manager raised $165 million and built a portfolio of eleven investments. The firm was able to garner average ownership positions of appropriately 25%, while investing an average of $15 million per company. In addition, the fund secured participating preferred securities in ten of eleven deals, which served to effectively lower the exit value needed for the fund to generate certain returns. In a highly simplified example, in order for the fund to generate a 3x net return, each portfolio company would need to exit at a mere $210 million.[7] In reality, when factoring in structure (i.e. the fund’s participating preferred securities) and recycling, the fund would likely need each portfolio company to exit at a valuation between $150 million and $190 million. By targeting less competitive geographies (where valuations are lower), working with later stage profitable or near-profitable businesses (to mitigate losses), maintaining fund size discipline (to maximize the impact of the winners), garnering meaningful ownership and lots of structure (to further enhance the impact of the winners), this fund incorporates many ingredients that help position it for success. These factors, coupled with strong execution on the part of its General Partners, set it apart as one of the top performing funds in our roster.

Finally, we would be remiss not to mention the mountain of evidence supporting the notion that managers that outperform tend to do so with more frequency over longer periods of time in venture capital, versus any other asset class. Landmark empirical studies, like Has Persistence Persisted in Private Equity and The Persistent Effect of Initial Success: Evidence from Venture Capital, prove this phenomenon. Much of this is because venture capital is effectively a two-sided marketplace. Unlike arguably any other asset class, the best entrepreneurs select the firms from which they wish to accept capital. In contrast, public market CEOs cannot prevent investors from buying securities, and the management teams of companies acquired by private equity firms will not sell their businesses to a firm offering a lower price than another one. This makes venture capital unique. The best founders gravitate to firms and individual partners with cachet, expertise in a particular vertical and/or highly differentiated models or methods of adding value to their organization. When partners and firms develop these skills, these skills become widely known, and their success can beget further success.

Additionally, venture capital investors who do back a successful company typically secure rights allowing them to make additional investments in the company in future financing rounds. These are referred to as pro-rata rights. Firms that exercise their pro-rata rights and disproportionally allocate to their winners can further swing the odds in their favor for continued success in the future.

While we believe that persistency in venture capital is a real phenomenon, we do object to the simplistic view that managers that have outperformed previously will do so again. The truth is that a venture capital firm closely resembles a living organism. A myriad of factors can affect a firm’s ability to outperform over time, and we have observed most of them firsthand. Some recurring ones include strong/poor generational planning, thoughtful/suspect sector bets, equitable/inequitable internal economic sharing and disciplined/bloated fund sizes. The bottom line is that a firm’s status as a brand is a social construct, shaped by perception and not reality. The key is to separate fact from fiction by evaluating the qualitative alongside the quantitative and never being afraid to go against the grain.

[5] Data provided by Pitchbook and the National Venture Capital Associations’ “Venture Monitor”. Data as of 12/31/2018.

[6] Data provided by Pitchbook and the National Venture Capital Associations’ “Venture Monitor”. Data as of 12/31/2018.

[7] This assumes no recycling and 20% carried interest using a European waterfall.