PitchBook Should Stick to Data, a Response to a Recent Article

Recently, we’ve observed a number of news outlets trying to vilify tech founders and venture investors as cold-blooded capitalists living in a vacuum, rather than clear-eyed capitalists working to create value while helping to shape the future. The latest organization attempting to further this narrative is PitchBook, a private market data company whose clients include a number of venture capital firms, including us. In a recent article, author Anthony Mirhaydari uses a mixture of data points and anecdotes to suggest that venture capital is harming the broader U.S. economy. Admittedly, as a firm whose mission it is to champion the innovation economy through primary and secondary investments in venture capital funds and startups, we have a distinct point of view and feel compelled to respond. We vehemently disagree and believe that this ethos, if perpetuated, has the potential to damage the very fabric of American culture, values and global economic advantages. Using our best efforts to avoid bias, we will ground our opinions in hard data – in this case, PitchBook’s own.

Mirhaydari’s argument is largely based on his own interpretation of a scholarly collaboration by the two co-directors of the Berkeley Roundtable on the International Economy and can be summarized in two key bullet points, both of which we find to be oversimplified and unfounded.

1. Dollars invested into the ecosystem have ballooned to near dot-com era levels, signaling excesses that could negatively affect the economy at large.

Our Response: We do not dispute the fact that the amount of capital deployed to venture-backed companies has increased dramatically in recent years. However, this statistic alone is not enough to conclude that the market as a whole is “frothy” or “excessive.” To better understand the dynamics affecting the venture market, we took a look at the data and examined what types of organizations are funding venture-backed companies today vs. prior periods.

The graph below (featuring data gathered from PitchBook’s own platform) examines the constituents involved in financing rounds over the last ten years. We have distinguished between traditional U.S.-based venture capital firms (of all stages and sizes) and “non-traditional” venture investors, including corporations, hedge funds, mutual funds, crossover investors, and other institutional investors. 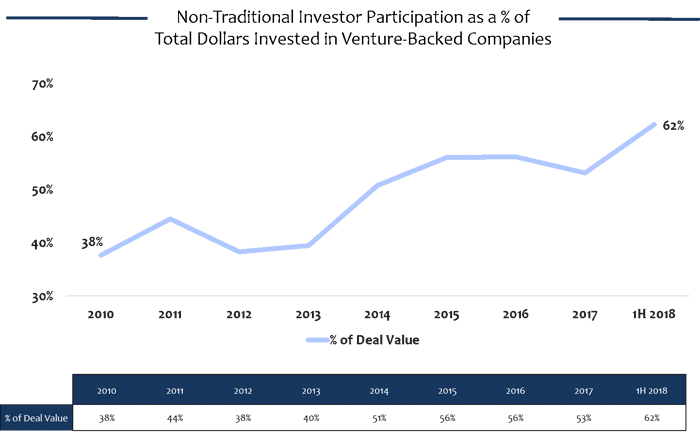 This analysis yields some staggering results. In 2010, non-traditional investors participated in 38% of total financing rounds by deal value. In the first half of this year, that percentage almost doubled to 62%. Further, in the first half of 2018, 60% of late stage financing rounds (Series D and beyond) included participation from at least one non-traditional investor, and 75% of the financing rounds in excess of $50 million featured participation from a non-traditional investor. This leads us to two conclusions. First, much of the additional capital invested in venture-backed companies can be attributed to new types of investors aggressively entering into the fray. Second, the meaningful growth in capital availability is largely relegated to the late stage market. So, that leaves us with a key question: are traditional venture firms, especially those that invest in early and mid-stage companies, acting irrationally? We would argue absolutely not. Our explanation is that the ubiquity and importance of technological innovation is attracting “tourist capital” seeking to back obvious category leaders before an acquisition or IPO. With fruitful IPO markets and a healthy acquirer set that includes both strategic and financial buyers, it’s no wonder a wide array of investors want to join the party.

As a firm that almost exclusively backs seed and early stage managers, we have found that the emergence of non-traditional late stage investors has been net neutral, or even slightly additive, to our early stage managers’ ability to generate outsized returns. In fact, we view these new investors as less dilutive sources of late stage capital, and, in some circumstances, liquidity providers for our early stage managers, as they often structure their investments to include secondary liquidity for earlier investors. So, rather than maligning venture capital investors (especially early- and mid-stage firms), who often work tirelessly with founders for years to create a company capable of shaping the future, consider the recent structural changes to the ecosystem at large.

Our Response: We agree that exit times are increasing for venture-backed companies. In fact, this has been the case since the late 1990s. The reasons behind this are pretty simple. Unlike the dot-com era, when companies could ride the wave of interest surrounding the Internet to IPO or M&A, today’s corporations, financial buyers and public market investors require meaningful scale. Additionally, capital availability, more liquidity options for early investors, and the extreme time and costs associated with completing an IPO further extend exit timelines.

The portion of PitchBook’s piece to which we object is the notion that “money-losing behavior” destroys economic value. “Money-losing behavior,” as a concept at all, strikes us as an amusing oxymoron. In many circumstances, we would argue that such behavior is simply an approach that repudiates short-termism in favor of optimizing long-term outcomes. We believe companies that exclusively focus on the present can quickly devolve into aimless bureaucracies. Without a long-term vision, they are stuck in an endless cycle of generating cash, buying back shares and trying to create so-called “efficiencies.” Over the long-term, there is abundant evidence suggesting that such companies tend to underperform. On the other hand, companies focused on maximizing shareholder value in the future typically outperform. While challenging to quantify, most academic studies suggest that actions like heavy investment in R&D, low rates of share buybacks and a lower likelihood of issuing dividends are behaviors practiced by companies with a longer-term orientation. A study of the S&P 500 by one of our managers, Founders Fund, found that founder-led companies, in particular, are the most adept at executing on a forward-looking vision. According to their data, founder-led companies invest 82% more into R&D and are almost 20x less likely to establish share buybacks than their publicly traded peers. Academic research conducted by Bain and Co. in partnership with Harvard Business School suggests that public S&P 500 companies with heavy founder involvement (i.e. a founder serving on the executive team or as a board member) performed 3.1x better than the rest of the index over a fifteen-year period.

Consider Amazon as a case study. Amazon is the second largest company by market cap in the United States, and its founder, Jeff Bezos, owns over 16% of its outstanding shares. It practiced “money-losing” behavior for 11 years, until finally turning a modest profit in 2015. It still produces relatively modest EBITDA and EBITDA margins. This is largely because the company ploughs a lot of its revenue back into research and development, at least 10.4% on an annual basis over the last four years. Despite its limited profitability, Amazon’s stock is valued 21.7x higher than it was 10 years ago, while the S&P 500 index is valued 2.2x higher. So, the logical conclusion is that with long-term vision, comes long-term value. With mountains of academic and anecdotal evidence supporting the sustained outperformance of long-term oriented companies, it pains us to read that the vast majority of public market CFOs prefer a short-term approach. According to a recent Wall Street Journal article, 78% of the CFOs polled would consciously sacrifice long-term value in order to hit their quarterly earnings targets. The short-termism championed by public market investors and management teams is the true enemy of value creation. Said differently, contrary to PitchBook’s message, the lack of public market scrutiny is the precise reason why venture-backed companies create long-term value. Private venture-backed companies are untethered in their pursuit of big ideas capable of shaping the future.

The article’s final point suggests that wealth creation from the innovation economy is concentrated in the hands of a small group of investors and founders, largely in Silicon Valley, thereby providing little benefit to the broader US society and economy. Without digressing into a political debate, PitchBook’s piece and the scholarly article to which it refers is a direct affront on capitalism. If we lived in a society where wealth was shared evenly or nearly evenly among all company employees, we would be optimizing for mediocrity. Why would an all-star employee pursue a new idea that could shape the future, if his or her upside was meaningfully capped? Motivation, innovation and risk-taking behavior would all but vanish, not to mention the massive social and economic uplift that comes with capitalism. We would further argue that the brand of capitalism associated with new company creation has far-reaching positive implications way beyond what is outlined in the article. Consider venture-backed companies as a proxy for the US start-up ecosystem. According to a study conducted by Stanford, despite venture capital investment only equating to 0.28% of U.S. GDP, companies that received venture funding make up 57% of the collective market cap of every company to go public since 1979. Within this cohort, venture-backed companies employ 38% of the total workforce, largely in high paying, desirable roles. Finally, and perhaps most importantly, within this group, venture-backed businesses sponsor 82% of corporate R&D. Said plainly, the companies our ecosystem helps to create are compounding their own economic impact.