“They come across the water a thousand miles from home with nothing in their bellies but the fire down below.”

Writing about policy is generally a treacherous undertaking from the perspective of an investment manager, both because it can change quickly and because, well, it can get political, and therefore should perhaps be avoided in the context of sacred venues such as dinner parties and investor communications. Still, as venture capital specialists, Greenspring Associates has witnessed an increasing injection of politics into the innovation economy by the federal government around issues such as net neutrality, “fake news” and self-driving cars, to the extent that it can no longer be ignored. One such issue to which we have become keenly attuned is the evolving landscape of immigration policy. We would like to aspire to discuss this topic from a nonpartisan, data-based perspective as we examine the role of foreign-born entrepreneurs in the American venture capital ecosystem. Our goal in this endeavor is to serve as unbiased reporters on the impact of politics on the innovation economy and the U.S. markets more broadly, given our vested interest as venture capital investors.

The Case for Immigrant Entrepreneurs

In July of 2019, the New American Economy Research Fund, a bipartisan research and advocacy organization fighting for smart federal, state and local immigration policies that help grow the U.S. economy and create jobs, published a report on the immigrant founders of Fortune 500 companies. Their research revealed that 45% of Fortune 500 companies were founded or co-founded by an immigrant or a child of an immigrant. 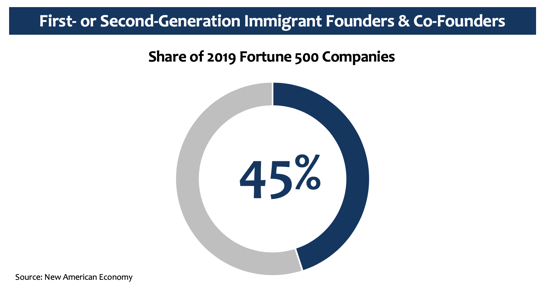 Specific to the venture capital industry, we have previously discussed data from the Stanford Graduate School of Business showing its disproportionate contribution to economic growth, job creation and innovation and its critical importance to a thriving economy. Further research reveals that foreign-born entrepreneurs represent an essential ingredient of the ecosystem: 31% of venture-backed founders are immigrants. In March 2016, the National Foundation for American Policy (“NFAP”) conducted its own study on privately-held, venture-backed startups with valuations in excess of $1 billion (“unicorns”). Of the 87 companies meeting this criteria as of January 1, 2016, 51% were founded by immigrants and had a collective value of $168 billion, while 71% employed an immigrant as a key member of its management or product development team. Another key finding was that immigrant participation in the startup economy resulted in meaningful job creation, led by SpaceX with 4,000 employees (up to 7,000 in 2018). Similarly, from a funding perspective, a Crunchbase News analysis shows that around half of the most heavily funded U.S. unicorns are led or founded by an immigrant. These staggering numbers show how essential it is to champion the U.S. as an important hub for innovation.

Most Jobs Created Among U.S. Billion Dollar Startups with Foreign-Born Founders or CEOs

A Global Competition for Talent

As a result of this measurable economic impact, there is a global race underway to attract and retain talented entrepreneurs, who have historically favored the United States as their preferred destination, and the perception of being welcoming to immigrants is as important as the reality. Headlines abound with reports on the measures other countries are taking to aggressively court entrepreneurs with more permissive and flexible visa policies and access to their developing startup ecosystems. For example, in January of 2018 China introduced two new long-term visa programs that can be obtained online, for free, in as little as five days. The visas are designed to attract “high-end” foreigners, such as scientists, entrepreneurs and Nobel laureates, and extend to the spouses and children of the recipients. In addition, launched as a pilot in 2013, Canada’s Start-up Visa Program became a permanent fixture for immigrant entrepreneurs in March of this year and offers permanent residency, allowing founders and their families the timeframe sometimes required by a startup to generate traction and growth. Additional countries offering startup visas or other incentives to entrepreneurial immigrants include: Australia, France, Ireland, Israel, Italy, Japan, New Zealand, Portugal, Singapore, Spain and the United Kingdom.

And yet, with the race underway to attract the world’s best and brightest talent, it is clear that government action has not provided a lift to our competitive advantage. From 1992 to 2017, the amount of venture capital investment led by investors in the U.S. as a percentage of global venture capital funding has decreased from 97% to 44%. In addition, Silicon Valley Bank’s 2018 U.S. Startup Outlook report suggests that 28% of startups (up from 26% in 2017) are seeking to domicile elsewhere for operational nonsales activities because of immigration, regulation and tax policies, with immigration policy driving 46% of those departures (up from 38% in 2017).

While a detailed dissection of current immigration policy is beyond the scope of this letter, it should be noted that legal avenues for the foreign-born entrepreneur are narrowing. Two important policies that deserve our collective attention are the International Entrepreneur Rule (“IER”), which the Department of Homeland Security (“DHS”) in May 2018 proposed to revoke, and the H-1B Visa program for high-skilled foreign nationals seeking employment in the U.S., which would benefit from an increased cap (the quota for which has already been reached for FY 2019). The New American Economy (“NAE”) estimates that the IER alone would create close to 200,000 jobs over a ten-year period, if implemented. It is also worth acknowledging that the IER requires “evidence of substantial and demonstrated potential for rapid business growth and job creation” for eligibility, including at least $250,000 in funding from qualified U.S. investors with a history of successful investments or at least $100,000 from Federal State or local government entities. Moreover, the DHS itself has estimated that the rule would most benefit entrepreneurs in the healthcare, professional, scientific and technical services industries, typically highly intelligent, educated and/or skilled individuals. The National Venture Capital Association is an excellent resource for further engaging with immigration issues as related to venture capital and provides ongoing updates on public policy developments.

We Have a Horse in this Race

Despite our abstinence from a partisan stance on immigration policy, Greenspring Associates has an inherent bias on the subject: our business is the beneficiary of our country’s ability to attract the world’s top talent. Said another way, we believe that recruiting and nurturing global innovators, visionaries and subject experts is not only crucial to the success of America, but provides our industry with the necessary top-of-funnel to source the best investment opportunities. We have invested in remarkable entrepreneurs, directly or indirectly through our managers, and General Partners who hail from geographies around the world, including Australia, South Africa, India, South Korea, Egypt, and so on. Notable companies to which the Firm currently has or has historically had direct or underlying exposure that were founded or co-founded by a foreign-born entrepreneur include:

In addition, culturally, Greenspring Associates prioritizes the assembly of a diverse workforce, including a number of current and past employees who are immigrants or children of immigrants. Pursuant to McKinsey’s 2015 report on the positive correlation between diverse workforces and financial outperformance, if diversity is defined as “made up of people or things that are different from each other,” doesn’t immigration represent an avenue for increased diversity – of thought, perspective and ideas – and thus better financial performance? These reflections are the basis for our conviction that we need to keep America at the forefront of global competitiveness and economic growth.

At Greenspring Associates, we are honored to be an advocate of the important role that the venture capital industry and entrepreneurs play in championing innovation. While the venture capital ecosystem's stamp on innovation is apparent through facts and figures like job creation and its importance to GDP, the impact of immigration policy is less apparent. While we agree that immigration policy is a necessary and positive institution for ensuring our nation’s security, we believe that America must be an attractive option for disruptive innovators, and foreign-born entrepreneurs are no exception. While our country still leads the global entrepreneurship index, its entrepreneurial edge hangs in the balance and it is critical that we nurture and protect our position through a thoughtful approach to entrepreneurial visas. With its broader implications to our start-up ecosystem, economy and culture as a whole, our hope is that U.S. immigration policy can become a point of patriotic pride rather than a political issue.