Dear Institutional Investor, are we ok?

Institutional Investor, are we ok? We’ve noticed some posts over the last year or so that suggest you’re, um, not that into us.

Last August, you said “Luck and Reputation Matter in Venture Capital. Skill Doesn’t.”  Maybe you supposed that we would not go beyond the contents of the article to draw our own conclusions from the underlying research. In fact, you may even have assumed that we would read no further than the inflammatory headline, as there was a glaring typo in the first sentence. 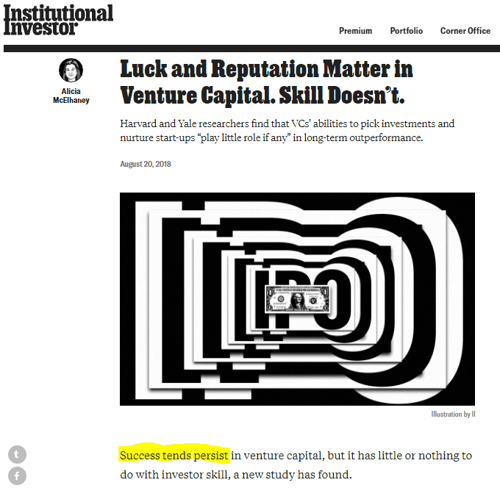 So we let it roll off our “skill-less” backs. But then last week, you fired another shot, one that hit us right in the feels: Close Ties in VC Don’t Pay Off: New research challenges conventional wisdom surrounding deep relationships in venture capital.

Do you have a recurring annual reminder to publish an anti-vc missive? As an organization that has spent the last 20 years developing deep and trusted relationships (check out our tagline!), you’ve got our attention.

We channeled our internal Lebowski and thought to ourselves, “This aggression will not stand, man.”

Do we sound flippant? We’re not.

We had a look at the underlying study on which your most recent article was based, and we have a few observations we’re compelled to share.

Defining the Relationship (“DTR,” in the parlance of our times)

The 2019 study on which your most recent article was based, Getting Tired of Your Friends: The Dynamics of Venture Capital Relationships, defines relationships between venture capital firms as existing by virtue of having historically invested in the same financing round of the same company from 1990 to 2012. A relationship is said to “strengthen” or “deepen” if a pair of these firms subsequently invests in tandem in another financing round (irrespective of company) and “weaken” if they do not. The venture capital firms in question are “the top 50,” which are more explicitly defined as the largest 50 VCs in the United States. The study uses data from various VC pairings from 1990 through 2012, and further examines the correlation between pairings, market conditions (based on capital flows, not performance) and exits.

How do you DTR? If you are a data scientist, the above description is perfectly reasonable. If you partner with founders and venture managers to build innovative companies and technologies, investing in a financing round together sounds more like proximity. In truth, the word “co-investment” means more to most VCs than simply participating in the same financing round. In fact, from our perspective, it requires multi-level alignment. We co-invest with General Partners at venture firms who have proven track records in identifying and nurturing talent, who understand the company’s industry, who have high conviction in the opportunity and will double down or go above pro-rata in subsequent financing rounds, and who share fairly regular deal flow.

Not every firm listed in the top 50 are “friends.” In fact, while the Venture Capital industry does not display the abject rivalries associated with a two-way marketplace such as leveraged buyout, where there is a majority controller who is the winner and the loser does not participate at all, it represents more of a multi-handed game. Some days, firms collaborate and share an interest in the positive outcome of a company in which they have both invested, on other days one firm may lose ownership or the ability to participate in a deal to another firm. The industry culture has historically operated with an underlying ethos that you are only as good as your next deal and all should play nicely in the sandbox, or you might get cut out because nobody wants to collaborate with you. With a structure that further results in minority ownership for all, everyone has minority rights and there isn’t a culture of dominance, as contrasted with other industries where one party has full control. So perhaps the more appropriate term, though certainly not one you’d expect to see in an academic research paper, is “frenemies.”

While the data from the study seems sound, we believe that the conclusion is flawed, with other factors worth considering. The changing nature of the VC landscape over the years covered by the study (1990-2012), for example, may be more responsible for these dynamics than any real erosion in “relationships.” The VC industry disrupts itself on an ongoing basis – and especially with regard to the time period in question.

Transformation in the Financing Continuum

In 2009, the standalone seed ecosystem was incredibly nascent. There were only a handful of early firms in the category. 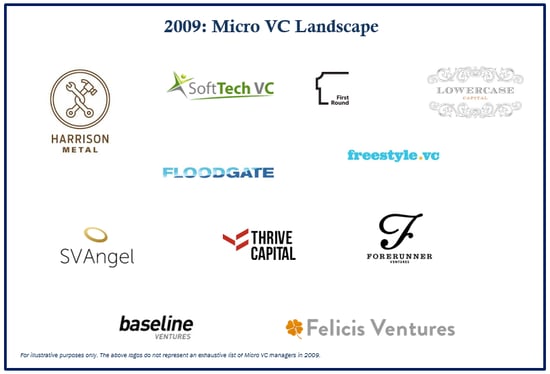 One of these firms has grown completely out of the category to $700 million in its latest fund size. Another one is no longer raising new funds. And the majority continue along with 500-600 new party-crashing “friends.” This herd will be culled at some point, but compression isn’t aggressively happening yet. If anything, things are becoming more complicated, with folks now trying to move earlier than even the seed investors.

Incubators and accelerators now have raised their own funds. University funds are sprouting up to fund innovation right off campus. Crowdfunding has become a cheaper, less restrictive pre-seed financing alternative. And more recently, the latest rage: The Scouts. Empowered operators with check books and delegated discretion are sent out to be one step faster than the seed guys. 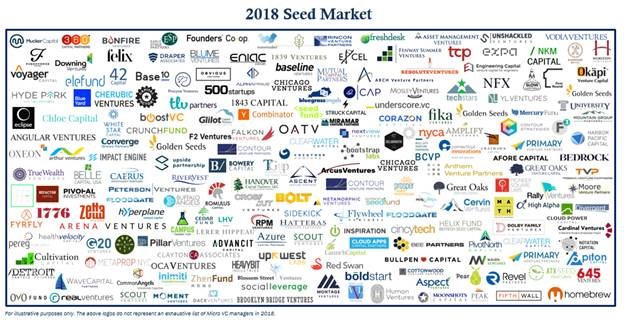 Even within the micro category, things continue to change as the segment matures. You are now seeing the trifurcation of the seed category. Incumbent seed groups that have been successful have gotten larger, driving to $80-150 million in fund sizes. With this new portfolio construct, $250k checks no longer work. Say hello to the $25 million pre-seed funds filling their place. On the other end of seed, massive fund proliferation has given rise to many more companies that aren’t yet ready for traditional Series A rounds, which have also gotten larger. Enter in post-seed or small Series A round players. The result is that differentiation in this crowded category is paramount, whether that be by geography, vertical or sub-stage segment. Competition is heightened further with the shrinkage in the number of seed financings over the past two years. Simultaneously deal value has stayed about the same, outside of a spike in 2015. Groups are piling into the most compelling deals together, fighting for ownership and bigger initial stakes.

Furthermore, with Series A rounds occurring later in a company’s lifecycle with more proof points, round sizes are increasing and competition for the best deals is at a fever pitch. As a result, early stage firms have to get more aggressive, doubling-down on their best companies at a later stage to increase ownership and fund-level impact. In fact, insiders are 2 times more likely these days to lead a Series B financing round versus 2011. Roughly 20% of the time, Series A investors are catalyzing their companies’ Series B rounds.

While this is a picture rife with complexities and competition, the exit data suggests a much rosier outlook. According to a study from Cambridge Associates, new and emerging firms have captured, on average, about 60% of the value created by the top 100 venture investments between 2006 and 2012. The “top 50” VC firms covered by the study by and large do not include a broad cross-section of emerging managers, which may also be responsible for the decline in frequency that such established firms are participating together in financing rounds.  Said more simply, the deal flow and exit returns may have been redistributed over this period of time in such a way that the significance is difficult to interpret, as there is no way to account for the proliferation of emerging managers and their effect on the 50 established managers on whom the data is based. 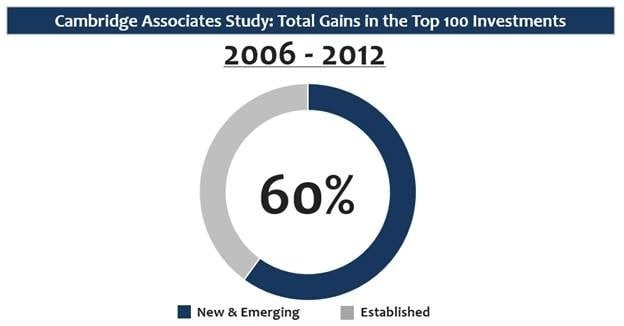 Itself”. The figures above represent total gains (both realized and unrealized) achieved by

an average of the top 100 performing venture investments as tracked by Cambridge Associates.

Fund status determined by stage of fund at time of investment. New & emerging funds defined as

funds I-IV and established funds as V or greater.

The innovation economy, which has become exponentially more distributed, both nationally and globally, now requires many of the best venture practitioners to partner with more localized firms to understand the dynamics afoot and gain access to deal flow in regions outside of traditional venture hotbeds of San Francisco, Silicon Valley, New York and Boston.  This is a far cry from the industry in the 1990s or early 2000s, when many VC’s proclaimed, “We only do deals within a 30 minute drive of our office on Sand Hill Road.” For example, while the Bay Area is still the world’s leading innovation hub, the high cost of living, the dominance of the tech giants and the ability to literally work from anywhere through technological advancements is driving founders and the people willing to work for them to other geographies, where the associated risks are less expensive to take. But proximity equals governance, and venture firms need help in other geographies in order to source, identify and access exciting opportunities outside of their own. For this reason, the disturbance in the investing relationships between the firms in question may be more attributable to geographic variance than any cooling of friendship. In fact, over 75% of the study’s subjects were based in the venture capital hubs of Silicon Valley, San Francisco, the Bay Area, Boston/Cambridge or New York.

Our investment practice is built around our trusted relationships with our managers, who are critical in being able to secure LP commitments in access-constrained funds, see value in us leading growth stage financing rounds for many of their outperforming companies and often consider us the liquidity partner of choice for a company on its road to exit or an LP looking to reassign their interest in a fund. In each circumstance our goal is to be an efficient and informed counterparty, while being a strategic partner to our GPs. The VC industry is ever-evolving and nuanced, and while we applaud studies around its trends and data, we are compelled to debate conclusions we feel do not take into account its complex dynamics.